Bolivia opens up national parks to oil and gas firms 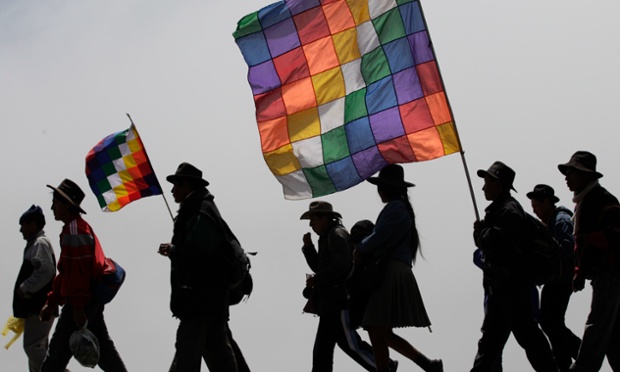 The Madidi National Park in north-west Bolivia is one of the most biodiverse places on the planet. One particularly astonishing fact: the park hosts 11% of the world’s bird species, according to Bolivia’s park service, SERNAP, and the US-based Wildlife Conservation Society.

Bolivia’s government calls Madidi a “protected area”, but really it’s no such thing. 75% of its 1.8 million hectares - which includes both the park itself and a “Natural Area of Integrated Management” (NAIM) - are overlapped by oil and gas concessions held by Spain’s Repsol, Brazil’s state oil and gas company Petrobras, and PetroAndina, a joint venture between the Bolivian and Venezuelan state companies, YPFB and PDVSA. In addition, there are coca farmers and gold-miners, and the threat of a long, long-mooted plan to build an enormous hydroelectric dam, El Bala, which president Evo Morales has been talking up, and which is slowly moving forward and would flood a huge swathe of the park.

Madidi is just one of 22 “protected areas” in Bolivia - all of which are now more threatened than ever by government policy opening up huge new areas to oil and gas. Over 20 million hectares across the country have been identified, contracts signed, and on 20 May a new law was declared specifically permitting “the development of hydrocarbon exploration activities in the different zones and categories within protected areas”, and stipulating what companies should do if they make “commercially-viable discoveries” and want to exploit them.

True, the new law states that oil and gas operations in “protected areas” will reduce poverty and contribute to Bolivia’s development, and requires “fragile ecosystems” to be taken into account and the use of the most up-to-date technology, among other things. But what will, or could, be the social and environmental impacts? What do Bolivians working on social and environmental issues think?

Carmen Capriles, from grassroots organisation Reaccion Climatica, told the Guardian that Bolivia’s “protected areas” were established to protect wildlife and rivers, and that the new law is “really worrying” and the potential impacts “devastating.”

“This is absolutely not the kind of policy we expected from president Morales after such big speeches and discourses about Mother Earth and Pachamama and how we should start living in harmony with her,” Capriles says. “What we have seen in these nine or 10 years of government is that our natural resources and our forests - the richness of Bolivia - has been depleted much more than any other period of time.”

That opinion is shared by independent environmentalist Teresa Flores, formerly from organisation PRODENA. “There’s an idea that this government is progressive in defending Mother Earth,” she says. “It’s totally to the contrary. That’s totally false. This government is destroying the environment more than any other. The only interest is to exploit natural resources as quickly as possible.”

According to Flores, the new law is “full of lies” and further proof of the “environmental disasters this government is causing in the name of “Mother Earth”.” She told the Guardian that Bolivia’s “protected areas” were not established to be “responsibly exploited” as the law states, and pooh-poohs the requirement that oil and gas exploration will proceed according to protected areas legislation because that legislation prohibits such operations.

Flores also says the law’s requirement that exploration will be subject to “independent Environmental Impact Assessments” (EIA) is misleading because the government has turned the EIAs into a “simple formality”, and SERNAP, which must evaluate the EIAs, has “no independence and does what the government wants.” In addition, she notes that the law overrides all previous “protected areas” legislation.

“What this is saying is that all the laws that really protect protected areas will no longer apply,” Flores told the Guardian. “The truth is that for a long time the government has failed to respect our protected areas, first by allocating little budget and second by doing nothing when they’re invaded by coca. The government sees them as an obstacle to development, but doesn’t say it openly in order to keep people thinking it’s defending Mother Earth.”

For Jorge Campanini, from Bolivia’s Documentation and Information Centre (CEDIB), the “scariest thing” about the new law is the power it gives to companies who will now be able to “radically” modify the way “protected areas” are used.

“The discovery of a potential commercially-viable deposit within a Protected Area means that the company can demand that SERNAP reconfigures the park,” Campanini wrote in an article in Bolivian newspaper La Razon. “The Protected Area and its [land-use] zonification would be re-drawn according to oil exploitation criteria rather than the criteria of conservation and protection. . . Many [of Bolivia’s protected areas] have already been impacted by mining, with impunity, and now [this new law] is their final sentence.”

Campanini told the Guardian that the new law also “makes viable” exploration in “protected areas” for which the government has already signed contracts - with Repsol, Petrobras, France’s Total, Russia’s Gazprom and China’s Eastern Petroleum and Gas. Some of these contracts were signed relatively recently, while others, such as Repsol’s and Petrobras’s concessions in Madidi, date back to 2007 but were effectively blocked by opposition and have lain “dormant for various years.”

“[The new law] removes all the obstacles and paves the way so that there is no problem fulfilling these contracts,” Campanini says.

Carlos Arze, from the Agrarian and Labour Development Studies Centre (CEDLA), shares this sentiment with Campanini, believing the new law removes ambiguities in prior Bolivian legislation. The 2009 Constitution, for example, states that “protected areas” form “part of the natural and cultural patrimony of the country”, but also perform “economic functions for sustainable development.”

Arze also says the new law violates indigenous peoples’ rights, and permitting oil and gas operations in “protected areas” in the Amazon in particular could cause “enormous problems.” He notes this is just one of several planned laws aimed at facilitating oil and gas operations - “There are others on the way” - and disputes that it is intended to “develop” parts of Bolivia.

“The law is not, as the government claims, about bringing development to these areas because only 1% of the amount spent on exploration will be invested [in the protected areas themselves],” Arze told the Guardian. “That’s what the law itself says.”

Marco Ribera Arismendi, from the League for the Defence of the Environment (LIDEMA), describes the law as the “death foretold” of Bolivia’s “protected areas”, arguing that SERNAP has been weakened and politicised over the years and that a series of recent laws, or laws currently being prepared, also pose “enormous risks” to “protected areas” - to say nothing of an announcement by the vice-president in 2013 that such areas would be opened to oil and gas.

Ribera, in an article responding to the new law, also notes caustically that it was approved just two days before World Biodiversity Day - “showing the degree of sarcasm with which these issues are managed” - and that it only prohibits oil and gas operations from “Natural Sanctuaries and Monuments”, even though no such areas exist at the national level.

According to CEDIB, using SERNAP and YPFB as sources, 11 of Bolivia’s 22 “protected areas” are now overlapped by oil and gas concessions. In addition to Madidi, these include the Inao National Park and NAIM - 90% of which is overlapped by a concession held by Total and Gazprom - and the Pilon Lajas Biosphere Reserve and Indigenous Territory - more than 85% of which is covered by Petrobras and Repsol concessions. Another example is the Isiboro Secure National Park and Indigenous Territory - well-known internationally by its Spanish language acronym TIPNIS and 35% of which is open for oil and gas.

According to Bolivia’s El Diario, Fernando Vargas, an indigenous leader from TIPNIS and former presidential candidate for the country’s Green Party, is planning an international march to defend the country’s national parks. “It is lamentable that the government has approved a Supreme Decree authorising oil and gas prospection in protected areas,” Vargas is quoted as saying. “While we must talk about development, we are opposed to the destruction of the natural world and environment which is the future for our citizens.”

Another Bolivian media outlet, Los Tiempos, reports a Guarani leader fearing that the new law will mean oil and gas companies “invading” indigenous territories. “The Decree doesn’t only affect the Guaranies,” Celso Padilla is quoted as saying, “but all indigenous peoples.”

Bolivia’s Ministry of Hydrocarbons and Energy did not respond to questions.