Human Rights Are Women's Rights, and Neither Is an Objective of the Global Climate Agreement

Climate change affects women disproportionately—yet tensions among Middle Eastern states, and a dearth of women at COP21, mean the final agreement is unlikely to do much for them. 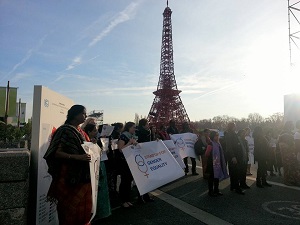 Maria Nailevu flew from Fiji to Paris because she wanted to make women's rights—and Pacific Islander rights—heard during the climate talks in Paris. For Nailevu, climate change is a highly personal issue. She grew up in Taveuni, the third largest island in Fiji, and can still clearly recall the time in her childhood when her home was destroyed by a cyclone. Fortunately for Nailevu, her family had been safely evacuated to a church in the village by the time the storm struck land.

"I can still remember the fear I had," she tells me over coffee in the media center at the convention site in the suburbs of Paris. "The heavy rainfall and strong wind—the whole world got dark." The following morning, she says, Taveuni was "a site of devastation."

Today Nailevu, 35, lives in Suva, the capital city of Fiji, where she is a gender-equality advocate, and, increasingly, her advocacy portfolio includes climate change. She's in Paris representing the Women's Environmental Development Organization, and when she recalls the time she lost her childhood home, she can't help but see it through the lens of gender.

Women make up about 20 million of the 26 million people displaced by climate change since 2010.

"Just imagine the burden on women," she says, pointing out how it was her mother who evacuated her and her two baby brothers and comforted them through the cyclone. "We are women, we are the most vulnerable communities that are facing the brunt of climate change," she says. "For me, as a Pacific Islander, we rely on land and ocean for survival.... While developed countries are enjoying the comfort of their homes, we are fighting off waves at the front of our houses."

Nailevu's mother isn't the only caretaker who has found herself suddenly displaced in developing countries. Women make up about 20 million of the 26 million people displaced by climate change since 2010, according to estimates. And when the hurricanes make landfall, or the rivers run dry, or the ocean creeps in, study after study has shown that it's women—particularly poor women in rural areas—who are hit the hardest.

And yet, despite the mounting evidence of the sundry ways gender intersects with the problems posed by climate change, the global climate agreement forged in Paris will have little language that addresses those realities.

On Friday, activists seemed increasingly resigned to that. "The mood is a bit flat right now," Nailevu acknowledged.

Earlier in the week, the outlook for groups like Nailevu's had been rosier. Until recently, for instance, Article II of the agreement—which defines the convention’s main objectives—specified treatment for both women's empowerment and human rights. But by midweek, only vague language around human rights remained. By Friday, even that had been shifted—to the preamble of the document, which doesn't have any legally binding power under the convention, though some language on gender was also added back in. Camille Risler, a program associate for the Asia Pacific Forum on Women, Law and Development, says that, while many in civil society were "happy" that the language is in there at all, "it's a bit useless" in the preamble.

"If you want to address in an equitable manner the impacts of climate change, you need to have a gender-differentiated perspective," Risler says. Otherwise, she adds, you will miss much of what is happening on the ground and the patterns of discrimination.

Anabella Rosemberg, with the Trade Union Non-Governmental Organizations, put it only slightly differently, calling the inclusion of the gender and human rights language in the preamble "a step we will build on in the future—not a victory." She wanted to see it in Article II.

Of the seven times gender was mentioned in the text earlier this week, only three remain in its current incarnation and only two of those mentions are in the main body of the text—one in a section on adaptation, and a second in a section on capacity-building. That's not nearly good enough for Risler and her compatriots, particularly in a negotiation presided over by France.

"[The French] like to stress that they are doing many efforts to ensure human rights and gender equality in their country but also everywhere," she says. "Last night we were surprised to see they didn't really try to push for retaining this language in the text."

Delegations from Mexico, the Philippines, and Costa Rica have been leading the way on women's rights and human rights and the rights of indigenous peoples, she says. And on Friday, ministers and heads of delegations from Switzerland to Uruguay sent a letter to COP21 President Laurent Fabius urging him to push for language protecting human rights, gender equality, and the rights of indigenous peoples in the final stretch of negotiations. But even the advocates who touted the letter to me aren't holding out much hope at this point.

Certain countries, including Saudi Arabia, have already threatened to muck up negotiations over the inclusion of women's rights, inserting a poison pill into the language last week with a bracket about protecting "peoples under occupation"—a reference to Israel's West Bank presence certain to draw objections from the United States and Israel. The brackets have since been removed, but Risler, for her part, remains disgusted with both the U.S. and Saudi Arabia's behavior.

Some language of interest to vulnerable communities remains in Article II, such as language around resilience; specifically, that a chief purpose of the agreement is to "increase the ability to adapt to the adverse impacts of climate change and foster climate resilience." But to Carmen Capriles of Bolivia, an outspoken advocate for indigenous women and founder of Reacción Climática, a non-profit aimed at advancing the participation of the youth of Bolivia, the resilience rhetoric is downright offensive. "It's very funny how they talk here about 'resilience' as a good thing, because actually it's not," she says, unsmiling, after a demonstration with WEDO earlier this week. "You shouldn't have to be resilient. It's like, if I punch you—like those dolls that if you punch them they come back—that's resilience. You shouldn't be expected to receive the bad impacts in the first place."

Like Nailevu, Capriles has seen the impacts of climate change firsthand, particularly in the Bolivian highlands, where increased temperatures are depleting the country's glaciers at a perilous pace. The impacts are a problem for all Bolivians, she says, but especially for poor ones, and especially for poor women. "Climate change magnifies inequalities," she says, adding that, in Bolivia, women still have fewer resources. "Men are more likely to migrate to urban areas while the women stay home on the land. Men have much more movement."

So why aren't women's voices being heard more? Part of the problem may be a lack of female negotiators at the table during climate talks. Just 36 percent of all negotiators at this year's COP are women, according to Risler's numbers, and at the highest levels of negotiation their participation is roughly halved.

Jessica Olson, an associate campaign representative for the Sierra Club's international climate campaign and member of the Sierra student delegation, tells me that at past conferences she's kept a tally of the people speaking during negotiating sessions and found that only a third of them were women. (This year, her youth delegation isn't even allowed into negotiating spaces, so she hasn't been able to update the numbers.)

To Olson and so many others, having more women at the table—speaking—is an essential step toward integrating gender into the climate discussion. "What's being advocated now is talking about women as solutions to climate change and how women have knowledge and insight into what needs to be done," she says. In the past, she adds, the rhetoric has too often focused on women as helpless victims with nothing to contribute.

Another thing Olson would like to see, though she reckons it's a number of COPs away, is talking about "a spectrum of gender," rather than just talking about women. "That doesn't quite happen in this space yet," she says, "but I think it's a work in progress."

“Catastrophic Consequences of Climate Change” is Pacific Standard’s aggressive, year-long investigation into the devastating effects of climate change—and how scholars, legislators, and citizen-activists can help stave off its most dire consequences.