They were not at the Beijing Conference, but...

Four young leaders spoke at a panel on “Gender equality and youth: 20 years since the Beijing Platform for Action and onwards to a post-2015 development framework”, organized by UN Women as part of the ECOSOC Youth Forum in New York on 3 February. Photo: UN Women/Ryan Brown

Some were not even born in 1995. That was the year when the 20-year-old Beijing Declaration and Platform for Action took shape. But their voices are no less relevant. Four passionate youth activists shared what gender equality means to them. We weave together some of their ideas for action and thoughts on what the Beijing Platform for Action means to them –a generation later– and how youth are a part of that change. 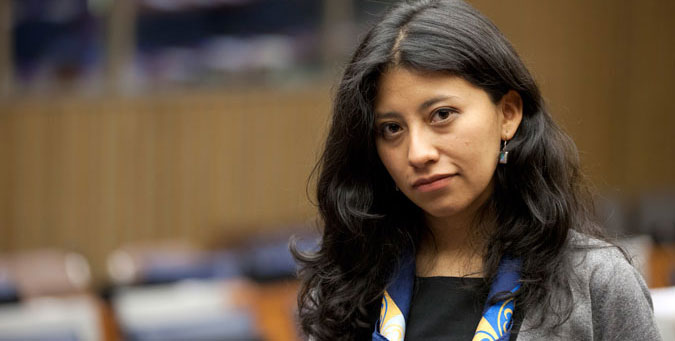 From Bolivia, 25-year-old Mirna Ines Fernández is a Professor at EMI University, and Member of the World Association of Girl Guides and Girl Scouts. Photo: UN Women/Ryan Brown

"Young people are the protagonists of thinking out of the box. They can themselves create new definitions of what is masculinity and femininity, and break the stereotypes that are root causes of gender inequality. My vision of gender equality is a world where girls and young woman can be themselves, develop their leadership skill without any fears. It is important that we take into account the deeper causes of gender inequality.- Governments need to make mechanisms available to hold them accountable, but we as youth, have a critical role to hold them accountable.”— Mirna Ines Fernández