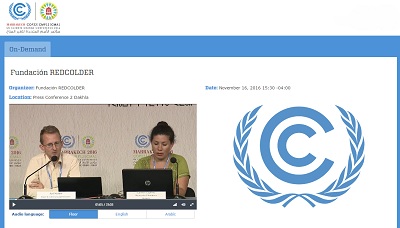 Marrakesh, COP22. A report, launched today at the UN Climate Summit in Marrakesh shows that fossil fuel exploration is completely incompatible with the Paris Agreement. It is also a bad investment with quickly declining prospects. The report by the Leave it in the Ground Initiative (LINGO) shows that existing reserves exceed the carbon budget available for burning fossil fuels after Paris by a factor five. Exploration for more coal, oil and gas only increases the carbon bubble. Exploration investments, are exposed to increasing risks due to decade-long time frames for payback.

“Stopping exploration is a high-leverage mitigation option for governments which can stop giving exploration licenses immediately. Citizens can remind governments of existing commitments such as not to explore in protected areas.” said Kjell Kühne, author of the study.

The report shows how today's exploration projects are operating in increasingly difficult social, ecological contexts, with declining economic returns. It is now happening in ecologically vulnerable places such as the Amazon rainforest on the land of non contacted indigenous tribes or offshore, for example in the Arctic. Protected areas are also targeted by explorers, in spite of government commitments to not allow exploration in these areas.

The full report „The low-hanging fruit: Fossil fuel exploration and climate change“ is available for download at the LINGO website: http://leave-it-in-theground.org/exploration/

About the Leave it in the Ground Initiative (LINGO): LINGO is a think tank that proposes solutions for keeping fossil fuels in the ground and transition to a 100% clean energy society. It has been involved in the UN climate negotiations in since 2011.

The Paris Agreement is the biggest step taken so far at global level to face the climatic change, and we welcome and congratulate the great efforts taken to commit and involve so many countries into finding solutions and facing this crisis acknowledging issues so important like human rights and gender equity, we hope this agreement will find on the signatory countries the political will to generate the so needed change.

I live in Bolivia a country where, in September 17 of this year, a very particular encounter took place between and Oil Company and what we understand as indigenous people living in “isolation". Taking into account that we are in the 21st. century this encounter should have the same weight and importance as if our western society would make contact with any other alien intelligent form.

Despite the testimonies of eye witnesses, the event was totally ignore by authorities, notwithstanding the fact that Bolivia has, since 2010, a law to protect the territories of indigenous people living in “voluntary isolation”, but in a country where the economy depends on exporting oil and gas, this “episode” has not importance at all, furthermore has led to threats to activist and organizations that oppose to this kind of operations.

The fossil fuel industry worldwide has shown us that they don’t know limits despite all facts related to climate change and the urgency to shift to other sources of energy, the fossil fuel industry will penetrate any forest, contaminate any water source and fracture until the last rock in order to generate profit, because for them there is nothing sacred, the aftermath is that people defending water, defending forests, defending ground end up becoming outlaws.

Furthermore, global campaigns are taking place by women to ask for climate justice, the statistic tells us that most of this environmental defenders are women, women that are putting their own bodies in the first line of defense, they are not willing to give up on nature no matter what the cost, even if that means their own lives

If we want a meaningful implementation of the Paris Agreement while keeping the human rights spirit with which it was created, United Nations should encourage its parties and especially the signatory parties to have safeguards toward environmental defenders especially those opposing to activities that generate high carbon emissions.

To conclude, I salute all environmental and human right defenders wetter they are in Madidi in the Bolivian Amazon Forest or in the Standing Rock of North Dakota.

I urge you to hear those voices to understand that there are things that are still sacred and need to be respected, if we cross those thresholds what is in stake is not only our planet any more but is our own humanity.

WE WONT GIVE UP ON OUR BEUTIFULL PLANET!