By DAVID JOLLY and CHRIS BUCKLEY 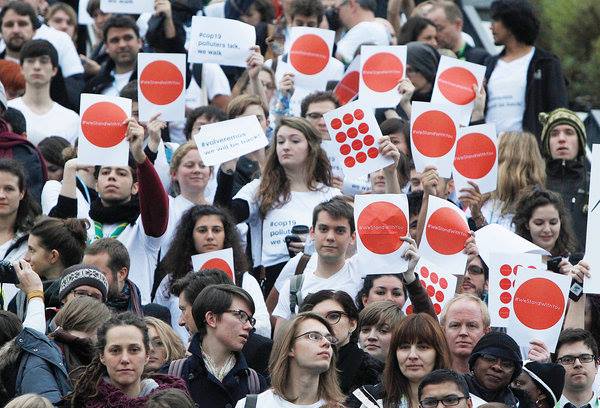 Environmental and civil society groups on Thursday in Warsaw protested what they consider the lack of progress being made on negotiations for a new global climate change treaty in 2015.

WARSAW — Discord and rivalry between Beijing and Washington have factored in international discussions of global warming since the United Nations climate treaty was established in 1992, contributing to the foundering of the 2009 talks in Copenhagen and much rough sailing since.

But with China having recently surpassed the United States as the world’s largest emitter of greenhouse gases, the countries are finding that their interests increasingly overlap, climate experts and government officials say. The more productive relationship is raising hopes that the friction of recent years may be easing, paving the way for a new global climate change treaty in 2015.

International delegates have been meeting in Warsaw to negotiate the provisions of that treaty. The conference is scheduled to end Friday.

Zhang Haibin, a professor of international relations at Peking University who has served as an adviser to China’s Ministry of Commerce, said that while climate cooperation with the United States remained difficult, there appeared at the very least to be a tacit agreement not to torpedo the talks. That represents progress.

At the government level, “I think there is some convergence,” Professor Zhang said. “They can speak a common language about this.”

The countries are driven by compelling domestic constraints as well as a desire not to be seen by other nations as superpolluting superpowers that scuttled an international deal. China suffers from choking pollution produced by its hundreds of coal-fired power plants, and it has invested billions of dollars in alternative energy sources to power its growing cities. The Obama administration, facing court orders and pressure from environmental and public health groups, is writing rules to clean up existing coal-burning power plants and essentially ban the construction of new ones.

The cooperative spirit has been on display this year in an agreement by President Obama and President Xi Jinping to work together to phase down the use of hydrofluorocarbons, a family of potent greenhouse gases widely used in propellants and refrigeration. In April, Secretary of State John Kerry announced the formation of a United States-China climate change working group.

“The United States and China are absolutely essential” to this process, Christiana Figueres, the executive secretary of the United Nations climate convention, said in an interview.

She continued, “No agreement will move forward without their participation.”

There remain formidable impediments to reaching a deal in 2015 in Paris, where negotiators will try to fashion a new agreement to replace the moribund Kyoto Protocol. Among them, of course, are the very commitments that countries are willing to make to reduce their greenhouse gas emissions, when they fear that doing so could slow economic growth. Also at issue are questions of so-called climate justice, that is, who should pay for the climate-related damages and how much should be diverted from rich countries to poor ones to protect against the inevitable losses from rising seas and violent storms. These are the fraught subjects under discussion here this week among the 195 members of the United Nations climate treaty meeting to map a path to a new accord.

But it is the confluence of those two issues — emissions reductions and financing for climate adaptation — that has so far frustrated the United States and other developed nations in dealing with China.

Despite China’s being the world’s second-largest economy and the largest greenhouse gas polluter, it is treated under the rules of the United Nations Framework Convention on Climate Change as though it were the relatively poor developing country it was when the treaty was created. China has until now allied itself with the poorest African countries and most vulnerable island states in demanding a set of rules and obligations separate from those that apply to the United States, Japan, Australia, Canada and European nations.

The United States argues that those categories — annexes, in the treaty’s terms — are outmoded in a world in which developing nations will soon surpass the developed world in emissions, and China will soon be the largest emitter in cumulative historical terms.

“They do a lot,” Todd D. Stern, the United States climate envoy, said here this week, describing actions by China to slow its pollution. “I’m not criticizing China. The question is what they’re prepared to agree to.”

But, he added, the Chinese “can’t say both that the annexes are operational in terms of who does what and that they are immutable from 1992.”

As a practical matter, those distinctions make it less likely that the United States Senate, wary about the economic impact of an agreement, would ratify any eventual treaty that does not treat the largest polluters equally.

Xie Zhenhua, China’s chief climate negotiator, acknowledged at a news conference in Warsaw this week that China was now the world’s largest source of carbon emissions, a result of the country’s rapid industrialization.

But he said China was slowing the rate of growth of its emissions and would not wait until its people had reached the living standard of wealthier countries before taking more substantial measures to cut pollution.

He reaffirmed the principle of separate responsibilities for rich and poor countries, but he also signaled that China would work toward a treaty that provided benefits to all parties, rather than punishes one group of nations to reward others.

Robert N. Stavins, the director of the Harvard Project on Climate Agreements, said that a more cooperative approach by China would be a major lift to prospects for a new treaty, especially if it helped persuade other emerging economies like Brazil, India and South Africa to join.

“If the 20th century was the American century, a lot of people expect the 21st century to be the Chinese century,” Mr. Stavins said. “And if it’s your century, you don’t obstruct, you lead.”

A version of this article appears in print on November 22, 2013, on page A3 of the New York edition with the headline: U.S. and China Find Convergence on Climate Issue.